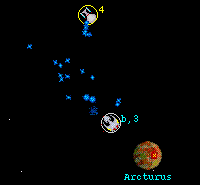 Assault ships have the best cloaking capabilities in the game and are mainly used for taking heavily guarded planets.

Primative graphics? Yeah, it isn't filled with eye candy. Neither is Chess or Go; real games don't have to be about the pretty pictures, it's about the game.

Netrek has action and strategy, and they've been honed to a careful balance over a longer development period than any other multiplayer computer game, period. Like chess, bowling, or baseball, you can play netrek for practically your entire life. Even if you are the best dogfighter, there'll be someone who's better at taking planets, or flying a starbase, or scout bombing.

Netrek is probably the first video game which can accurately be described as a "sport." It has more in common with basketball than with arcade games or Quake.

Its vast and expanding array of tactics and strategies allows for many different play styles; the best players are the ones who think fastest, not necessarily the ones who twitch most effectively. It can be enjoyed as a twitch game, since the dogfighting system is extremely robust, but the things that really set Netrek apart from other video games are the team and strategic aspects. Team play is dynamic and varied, with roles constantly changing as the game state changes.

Netrek is no-cost, open source software. Unlike some corporate MMPORPG, it won't disappear in a few years; it'll be around for as long as there are people who want to play it. You don't need a hot machine to play it, and you can play on Windows, a Mac, or Linux (and lots of other unixes too, if you want). You can put a server on one of those paperback-sized home firewall machines to take to a LAN party.

If you're a programmer and you want to change how the game works, you can do it and get people to try it out. You'll be hacking on the oldest Internet game protocol that's still in use (the third one ever written).

In the mid-nineties, Andy McFadden wrote up some nice historical documentation, which covers from pre-history through 1996.


Other Bits of History