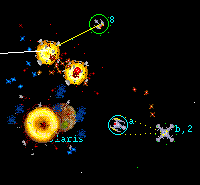 You should not celebrate dooshes when you are on the team that is cored.

Netrek software is the result of years of contributions made by many individuals. If you are interested in being part of this grand tradition by helping with continued growth and development of Netrek software, read on for developer resources. We don't just need coders, by the way; we also need people to help with promotion, and with web page and doc editing.


General Info and Getting Involved