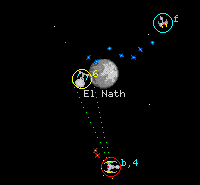 Check out the new Netrek Client apps for iPhones and iPads from Darrell Root! Search for Netrek in the Apple App Store.

The new "Netrek Game On!" app is up! Download this program for the Windows taskbar so you can hear an audio alert when a game has started

The new Star Trek movie is out and we're seeing a bunch of new players from around the world.

If you have news for us, don't hesitate to contact us. You can browse the news archive for past items.

Since the start Netrek has been developed according to an Open Source Model, which means that the Netrek source code is freely available.

Minimum requirements for Netrek are a minimum screen resolution of 1024x768 and preferably a sturdy three-button mouse or trackball. Netrek can be played over a modem without any problems, but a faster internet connection is recommended. The lower your round trip time (lag) to the server, the better is your responsiveness.

This is the most recent and actively developed Windows client. It includes lots of newbie-friendly graphic aids, like "det circles" and "lock lines".
It also can do 50 frames per second. If you run windows 98 or ME, see the docs for configuration info.

The latest version of XP 2009 is also available from playnetrek.org.

This is a new and exciting client. It's the first all-native Mac client ever, so it looks and works like Mac software instead of like traditional Unix software. While you can play just fine with a one-button mouse, more is better. It is the first Netrek client to support voice commands. There are large (25 MB) and small (8.3 MB) versions of a "trailer" movie you can watch. This client is evolving pretty quickly, so visiting the sourceforge download page may get you a more up to date copy than what we have listed here. There are a bunch of developer files, including a developer's guide, in the files directories.

COW was one of the main netrek clients back in the unix days of netrek. No builds have been published for some time, but the codebase is maintained. The Linux release below (3.01 p10 glibc 2.3) still works fine. It is likely that Debian Linux packages will be released soon after the release of Debian etch. You can, however, build it yourself; see the instructions for downloading and building directions on the development wiki.

COW was eventually ported to Windows, forming the basis for all later Windows clients. You don't want to go there except out of morbid retro curiousity.

There are no plans to further develop this client, with version 4.4.0.4 of May 06, 2006 as the final release.
It works just fine on Windows 2000 and XP (and probably Vista), and is a tiny download if you have a slow link.

This is here for historical purposes. It's the Windows client between XP Mod and XP 2009; you probably want to run 2009, but might want XP Mod if you need a small download or have a very slow machine. If you run windows 98 or ME, see the docs for configuration info.

The latest version of XP 2006 is also available from playnetrek.org. Older versions are archived at http://www.netrek.org/files/NetrekXP_2006/.

The TedTurner client is the latest incarnation of the Paradise client with 256 color pixmap support. No one has touched it in years, but the Mac build probably still works if you want to try playing Paradise from a Mac. The archives should still have source code if you want to do a new build.

This is an enhanced version of the Paradise client for Linux. It features stereo sound effects (OSS sound system) and pioneered several innovative features such as the Refit and Repair timer. Graphics aren't exciting by PC gamer standards, but are very efficient. It is built against glibc 2.3 for Linux on the intel architecture only.

Older versions of this client are archived on netrek.org at http://www.netrek.org/files/Paradise_2000. Source code is not available for this client. The build is only blessed for one year, so older builds will not work with servers that require RSA.

BRMH was the other popular Unix client. If you have an old unix box, there are more builds available than for any other client, so you are more likely to find something that works. There is also a relatively recent OS X build, so if you use a Mac and want a traditional client, it's the way to go. Despite the minimalism (no 256 color support), some veteran players do in fact prefer this lean and fast client.

There is a small pile of old client code, old server code, and code for various utilities sitting around on http://www.netrek.org/files/archive/ and http://ftp.netrek.org/pub/netrek/. If you want code for xtrek, jtrek, trekhopd, or any of that other ancient stuff, check around there, ask people, or look into the other developer resources \n"; echo getFooter(); ?>