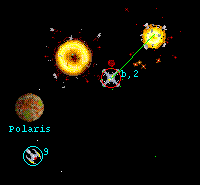 You should not cloak in your own backfield; you will only fool your teammates.

The Story of Ogg

While the concept of the suicide attack may have occurred in other games, such as Xpilot, Xtrek or Empire, the term "Ogg" was first used in either the Baker or Wean Hall computer labs at Carnegie Mellon University in I believe, November/December of 1990.

A group of us, which included Jay Hui (TheSlug), Byron Sinor (Krang), and Steve Russel (Feakhelek) were playing netrek. The three of us were Feds.

Netrek is a sixteen player game, with two teams of eight players. Each of the players is identified by their team's letter (F for Feds, O for Orions, and so on) followed by a number, 0 through 9 or "a" through "f". So a Fed player in slot one is F1, a Rom in slot 11 is Rb, etc. Above the player slots are slots for Robots and Observers, which are numbered from "g" on up.

The server god at the time (Terence Chang, who brought netrek to CMU from Berkeley the year before), was watching the game and logged in as one of the non-player robot slots Og.

At this time, suiciding people with kills *NEVER* happened. Dogfighting reigned supreme, and cloaking was used only for planet taking, that is until Terence decided to teach us CMU boys alesson.

Terence was one of the best players in the game and proceeded to terrorize Steve, such that at one point in the middle of the quiet computer lab, Steve burst out with "Help!! It's 'Oh' 'Gee'!". Followed quickly by additional screams of "Help" and the first uttering of "It's Ogggg! It's Ogggg! Helllppp!!".

Given the hilariousness of the situation, the term followed Steve and quickly was picked up among other netrek players.

The two accounts from which the above were assembled may be found here.