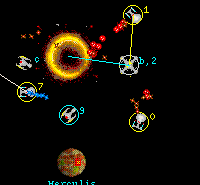 Scouts, your fast fragile friends
Destroyers, the twink's favorite
Cruisers, a happy medium
Battleships, for those times when a Cruiser just isn't enough
Assault Ships, for making those unwelcome visits
Starbases, one ship to rule them all
Numerology, a table of info about all ship types

Each section below contains a summary of some basic information about each ship type, and links to some other guides written about that ship.
This guide covers the standard ships used in all Netrek variants; some Netrek flavors have additional ship types.
Note: Cruising speed is the fastest speed a ship can travel at without burning fuel faster than it is making fuel.

These are fast fragile little things. They are very good for harassing, and are most often used for bombing. Sometimes scouts drop armies too, but since they can only carry two, this is a limited role for them. They are difficult to use to fight, especially for the inexperienced and against the heavily armored opponents, although they can dodge faster than anything else.

These are similar to scouts but they are a little more tough and they have slightly more powerful weapons. They are deceptively attractive; a bit quicker to turn and a bit faster than cruiser. The destroyer is sometimes erroneously referred to as halfway between the scout and the cruiser. If this were so, it would have more powerful phasers and be able to go an extra half warp faster. For the unskilled player, they live up to their nickname of "Ship of Lose". The destroyer is really a specialty ship, primarily used for taking planets by those who really know what they're doing.

An all-purpose ship, and the default if you don't select another. This is the best ship to use for learning, and is really the heart of the game. It's balanced; faster and more maneuverable than a battleship, but tougher than a destroyer and can carry more armies than anything except an AS or a base. Most people will be in CA's most of the time.

This ship is slow to accelerate and hard to maneuver. However, it has the most firepower of any normal ship. It is also very tough. Since it can take a fair amount of damage while still dishing out a lot, it is very effective for offensive players but watch your fuel, this ship uses a lot of it. The BB is not a bad ship for beginners, since it's harder to die in them. Dodging is tough for in a BB, so heavy use of tractoring, pressoring, and detting is important.

These ships are for bombing and capturing planets (something that beginners shouldn't try until after mastering a few basics). They are slow and clumsy, but have tough hulls and can carry more than anything else. They can carry 3 armies per kill as opposed to the usual two per kill, and can cloak without burning as much fuel as other ships. AS' also bomb well; the AS always bombs at least two, so if the planet is at 5 armies and you bomb it with an AS, it will always go to three armies or less! If the planet is at 6, however, you should first bomb it down to 5 with a normal ship and then have the AS bomb.

These are very powerful and hard to destroy. Each team is allowed only one at a time, and if destroyed, it will take about 20 minutes to build a new one. A team with less than four planets cannot build a new starbase. Other ships can dock at the base to refuel, and on most servers, ships can "transwarp" in to a base, flying there at very high speed. On most servers, a rank of Commander is required to fly a base, although there are "base practice" servers to learn on that have fewer restrictions. It generally takes several players working together to destroy a base. Newbies who see a hostile base are best off running away from it.

Ship Data for All Ship Types

Extensive data from a page by Bret Jordan.

Every tick, your ship's speed is added to etemp, and you lose warpcost*speed in fuel. There's additional cost if you're a SB moving with docked ships.

When etemp goes over maxegntemp, there's a 1/40 chance (per tick) of getting an overheat lasting 100 + random()%150 ticks.
This is why I still have to wait a few seconds after my scout cools to 0 before I can move. Weapon temperature works the same way.
Detonating heats weapons by 20 (remember it looks like 2 to the client) regardless of whether there's anything to det.

GA in the above table refers to Galaxy Class ships, which are not otherwise covered on this page, because they are a twinky Chaos and Sturgeon Netrek phenomena. There are also eight additional ship types in Paradise netrek. \n"; echo getFooter(); ?>