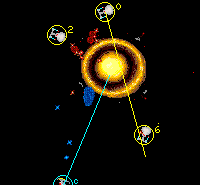 When you are in doubt, you should ask a Commodore, Rear Adm. or Admiral for advice.

I've been revising that file occasionally of the last couple years, so here's the updated version. I've deleted some, revised others, and added more. I've attributed some of them to various players; sorry if I butcher what you actually said, or attributed it to the wrong person. Send me more proverbs if you think of them, and I'll post another batch.

If you don't pick up the armies, they'll just get bombed anyway. (Spaceace)

The team that delivers the most armies wins.

One kill is enough to begin taking planets with.

Work as fast as you can.

When your team is behind, mutual; when ahead, threaten to take.

Attack at the same time but not necessarily the same place as your teammates.

Always go for the open planet.

It's dangerous to underestimate opponents or overestimate teammates. (Spaceace)

Scummy is another word for smart.

Sometimes you just have to hope that they miss.

Don't cloak in your own backfield; you will only fool your teammates.

Send a single distress call after you pick up armies.

Escort should stay between ogger and carrier.

Don't kill an ogger who is out of fuel or crippled.

When your team is ahead, don't mutual.

Escort a planet-taker instead of a starbase.

Get near their planets.

Phaser enemy cloakers, especially if they try to fly over you.

Watch the galactic map at all times.

Tractor enemies off of planets.

All you can control is your own ship.

Don't pass up an opportunity to bomb.

You can't be everywhere at once.

Don't fixate on one idea or one target.

Planning is good, but opportunism is better.

If an enemy is annoying you by playing well, consider adopting his strategy.

Instead of trying to stop their bomber, go bombing yourself.

Don't argue about which planet to take.

Nobody completely understands the game. Certainly not you.

If they have many armies and many kills, you are in trouble.

Always join the side with fewer players, even if it means switching teams.

Give information, not orders.

Don't tell others what to do.

There's never any one thing which is absolutely necessary.

Go bombing even when there is nothing to bomb. There will be.

Fly at maximum warp unless you need to turn.

Fire and turn away just as your opponent commits to closing in.

When in doubt, det.

Shut up and play.

Don't waste your fuel firing torpedos that the enemy will dodge.

Nobody can dodge phasers. (Woof)

Instead of flying in circles, stop; you'll save fuel.

Try not to give a kill to an enemy who lacks one.

Do the easy things first.

Fight near the enemy's front-line planets.

Death is only a temporary setback. (Spiff)

The lines are better than the dots, but the dots go farther. (Drewski)

Don't keep beating your head against the same wall.

You can run from multiple oggers almost as easily as from one.

Never go out to third space to escort.

The only way to counter a bomber is to pick up and use the armies.

You can't make your teammates more clueful, no matter what you type.

You can't really escort a teammate unless and until she flies towards you.

If you're too far behind to clear the designated planet, go to another one.

Don't go to the same place as another carrier (on your team).

God, give us grace to accept with serenity the things that cannot be changed, courage to change the things which should be changed, and the wisdom to distinguish the one from the other. (Niebohl)