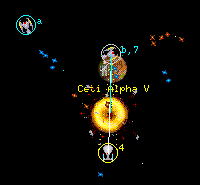 You should watch the galactic map at all times.

How to Help your Team Win

Netrek is a team game. The object of the game is to take over enemy planets. There are many strategies and tactics you might try to help your team's cause, but here is one very simple strategy which some of the best players often use. It's adapted from Joe Beck's "instant clue guide."

Here are some other ideas and tactics which sometimes work:

Attack enemies who have kills, if they might carry armies. Try to get to close range so your phaser will kill her, and if she kills you your explosion will hurt too. This is called "ogging". Unfortunately it generally requires chasing enemy ships, which puts you at an extreme tactical disadvantage because of the relativistic torp speeds. I.e., if the ship you're chasing runs and shoots at you (called "runner scumming", "butt-torping", and "butt-phasering"), you'll have a hard time doing much damage to her, and she can probably kill or cripple you at her option.

If a teammate is carrying armies and trying to take a particular planet (usually she'll indicate this on the team message board), you can try to "escort" her. In general this means staying between her and the enemy ogger(s), to prevent the oggers from getting to her. Also if they shoot torps at her, you'll be in position to detonate them so they don't hurt her. She'll be most vulnerable when orbiting the enemy planet, because she won't be able to dodge torpedos then, so try to establish "space control" at the target planet (i.e. get between it and the enemies).

When your team is well ahead, and especially when the opposing team is in a "Last Planet Stand" near their homeworld, and one of your teammates carries armies, think twice before killing anyone. By killing an enemy you grant him a fresh ship at his homeworld, which may be just what he wants. Remember, the game isn't about kill ratio, it's about conquering planets, so do whatever it takes to give your team a chance to get that last planet.

If you're being chased, especially by two or more ships, try running out into 3rd space. While you're occupying your enemy's time, your team can be attacking elsewhere. Of course, if your teammates go out to try to rescue you, the plan will backfire, but that's their fault.

Find a strategically important area and hang out there. This is called "space controlling." If you can guess which planet will be hotly contested, that's probably a good place to be, especially if you don't already have teammates there. If successful you'll be in good position to defend front line planets, escort takers to their front line, bomb their front line, and perhaps use some front-line armies yourself. You might want to pick your zone to be near a fuel world.

If a teammate flies towards you with an enemy chasing her, she probably wants to use you as a "screen" (as in basketball). Let her fly over you, and shoot the enemy as he tries to follow. In general it's good to step into the flight path of an oncoming enemy and fire torpedos.

People try various strategies to thwart bombers. One method is to stay and guard a planet which has a sizeable pile of armies. If the bombers stupidly try to bomb them with you guarding, you'll probably get kills off of them and then you can use the armies to take planets. But if they're smart they'll do other stuff, e.g. bomb other planets. If there's just one bomber, you could chase him, perhaps just "shadowing" him from a distance. He won't get much done, but neither will you. The best way to thwart bombers is to pick up armies and use them. E.g. ignore the bombers and go do useful stuff yourself, like bombing and escorting, until you get kills. Then go back to fetch armies. If there are none to pick up yet, you can position yourself so that when planets do pop you can likely get there before the bomber does.

Watch the galactic map. Spotting cloakers is a must. If an enemy cloaker flies near you, hit him with phasers to locate and kill him. And note when planets pop; even if it's impractical or impossible for you to bomb or pick up the armies at that given moment, it will give you important clues as to what the other ships will soon be doing.

First of all, try to dodge all enemy torpedos, and detonate most of the ones you can't dodge. Turning is the most obvious way to dodge, but you can also often dodge by accelerating, decelerating, tractoring or pressoring. Of course if you're heading straight towards the enemy when he fires at you, turning is your only way to dodge (unless there's a third ship off to the side that you can tractor or pressor off of).

Secondly, use phasers liberally. Most players rely primarily on torpedos to deal out damage, but against a player who can dodge well, firing torpedos is largely a waste of fuel. Nobody can dodge phasers! As a general rule, phaser at 20-point range or closer.

Fire torpedos when you think they'll hit, or when you want to force your opponent to dodge. As noted above, a good time to fire is when the enemy rushing towards you. Also, a ship moving at maximum speed can't dodge well (his main options are to decelerate or not to decelerate), so if you can lead your torps enough he might suck them. Firing torpedos at an orbiting enemy is reasonable; he'll have to accelerate if he wants to dodge. Don't fire torpedos across a teammate; the enemy might det your torps on top of your friend. In a dogfight, you might try just spraying torpedos in a random cloud in the general direction of your enemy. This can make it hard for him to plot a course around and between them, especially when you then alternate tractoring and pressoring him. In the meantime, of course, you should be pounding him with phasers.

In a protracted dogfight, fly slowly to conserve fuel. Warp 2, 3, or 4 is good, and punch a higher speed when you need to (or if you're trying to get somewhere). In a relative lull, fueling may be more important than dodging, in which case you should stop entirely (perhaps enter repair mode).

In a fight between a large ship and a small one (say CA vs SC), the large ship can win by phasering at medium range while dodging and detting. The small ship will generally either try to "plink" with torpedos from long range, or close to short range to decide the issue quickly.

If you can get to the target planet a few seconds ahead of the ogger(s), a good tactic is to fire a spread of torpedos right before cloaking. You want to cloak before they grab you with tractors, of course. Then bomb and beam down, detting as needed.

Feints are useful too; pretend you're going for one planet, cloak, then cut to another. Sometimes you can fly right through the first planet and take the one behind it, perhaps detting a torp or two over the first planet (in hopes that the defenders will switch their eyes from the galactic to the tactical when they see the torp explosion).

Go for whatever is open. Lame players constantly argue about which planet "must be taken next," and fuel and agri worlds are obviously more valuable, but for the most part just deliver your armies wherever you can, as quickly as you can. Weakening a planet (say from 4 to 2) is about as good as taking a planet that's at 0 or 1, unless your team has very few planets or the planet in question is agricultural. Nor should you feel particularly bad when you die with armies. If you hadn't picked the armies up, they probably would have been bombed anyway. Better to try and fail than not to try at all.

When you are one of two or more carriers on your team, try to attack different places, to spread out the defense. If the enemy team gangs up on you, run--your teammates will have good odds elsewhere.

Most carriers cloak a lot, largely because they know that not everybody watches the galactic map. But often it's better to stay uncloaked and fight; effectively be your own escort. E.g. suppose you and a teammate are both near a planet you want to take, both of you carry, and there is one defender. Cloaking in would be dumb. You should both uncloak, phaser the defender to death (unless he retreats enough that you can simply orbit and take), and then deliver your armies. If you are outgunned, on the other hand, cloaking and dodging around is a reasonable plan; sometimes the defenders will run low on fuel before they phaser-lock you, and if you pop into orbit at an unexpected angle you might succeed.

All of the above pretty much applies to bombing as well.

Communicating with Your Teammates

You'll encounter all kinds of personalities when you play. Some folks are friendly enough but not necessarily talkative, especially when they are concentrating on their game. Other folks are there to blow up stuff and let off steam, and would just as soon bash in your face as give you the time of day. But often you'll find that your teammates want to tell you what to do. Sometimes their suggestions will even be helpful, but not always. Even when a person means well, their hurried one-line message may not make much sense to you, especially when the context of what he was talking about changed between when he started typing it and when you read it. Also, keep in mind that as a beginner, you won't be much of an asset to your team, and the grouchy must-win types will wish they got Admiral Spaceace instead. So don't expect too much from the message board. But if you say "hello" when you join, and ask what the game plan is and how you can help, you'll get an A for attitude.

Apart from the usual futile attempts to suddenly instill "clue" in teammates, people sometimes actually use the team board in a useful way, namely to specify the status of their ship (in particular how many armies they carry) and their intent (if they know). The most basic form of this is the distress call. It's considered good form to send one distress call immediately upon picking up armies, even if you don't need help.

Much of the teamwork that happens among good players isn't due to messages as much as to "body language". I.e. they can see which way you want to fly, and adjust their actions accordingly. For example, if I see you (my teammate) with kills heading towards a planet with armies, I'll assume you intend to pick the armies up. Depending on my situation, that might indicate to me that I should screen off their bomber for a few seconds, or that I should go elsewhere if I want to pick up armies too. Or say I'm a starbase and I see you coming towards me: I'll tractor you, under the assumption that what you want to do, you probably want to do faster. (Pittsburgh drivers operate the same way; instead of using turn signals they just point their cars the way they want to go.)